226. The price of oil: 5 – Deepwater Horizon and the missing toolkit 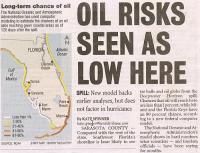 Dear Don
And so they’ve capped the well for now, although storms aren’t far away and the oil is still out there across the Gulf. I really hope your Florida beaches manage to avoid it.

Elsewhere around the coast it’s a mess, and although hurricanes might spread the oil, a silver lining from experience of the Braer oil spill off the Shetland Islands in the 1990s is that severe storms may finally help to dissipate the slick.

Combining these operations into drilling HP/HT deepwater wells is new within the past decade, pushing the technological envelope while incorporating the difficulties of both.

Although vilified for his PR gaffes, finally Tony Hayward did get it exactly right in one of his pronouncements last month, when he said that the real problem is we just didn’t have the toolkit to deal with problems in this setting.

In that sense, the Deepwater Horizon, just like the Sea Gem or Piper Alpha, will be a disaster which changes the way we do things for ever more beyond.

The problem is that as we push the boundaries, there is always the temptation to keep streamlining procedures for as long as we keep getting away with it.

BP got it wrong, but the same problem might have happened to any of the companies drilling in this setting.

The environmental manuals foresaw a spill on the scale of hundreds or a few thousands of barrels via a discharge from the rig floor itself.

No one expected that a BOP with its multiple safety mechanisms and double redundancy control systems would fail, but then perhaps no one thought that drilling might continue where those failsafe systems had gone down.

The response effort co-ordinated by BP since then has been criticised for being slow, but they’ve been inventing the missing toolkit in real time and for the very first time.

The response could only ever be about damage limitation until the flow of oil was stopped.

Finally they succeeded, and along the way the missing toolkit has been designed and implemented, more or less from scratch. A huge engineering achievement — if only the toolkit hadn’t been missing in the first place.

Somewhat counter-intuitively, perhaps, this is the crux of my argument against nuclear. The (theoretically) best-managed systems will (and do) break down from time to time. The unforeseen has the unfortunate tendency to occur.

From any reasonable probability analysis, it should be impossible for a modern and well-managed major oil store to blow up 20 miles from central London, but that’s what happened at Total’s Buncefield depot in December 2005.

In the nuclear industry, perhaps they would never keep working when their safety systems were prejudiced. But at the same time, Sellafield is looking at 20% staff cuts this coming year, and pressure on costs can lead to silly and costly mistakes in any operation.

As Chernobyl showed, we don’t have the toolkit to deal with problems in that environment either, and the timescale of the problem there is in hundreds of thousands of years. At Chernobyl, we barely held onto the edge of the precipice through the self-sacrifice of firefighters and helicopter pilots dropping concrete onto the sarcophagus of the plant. But we might not be so lucky next time.

At least oil does biodegrade in months or years, however bitter that really is to live through for all you residents on the shores of the Gulf of Mexico today.

This entry was posted in 2010, divided by an ocean, economics, environment, geology, history, peak oil. Bookmark the permalink.

4 responses to “226. The price of oil: 5 – Deepwater Horizon and the missing toolkit”