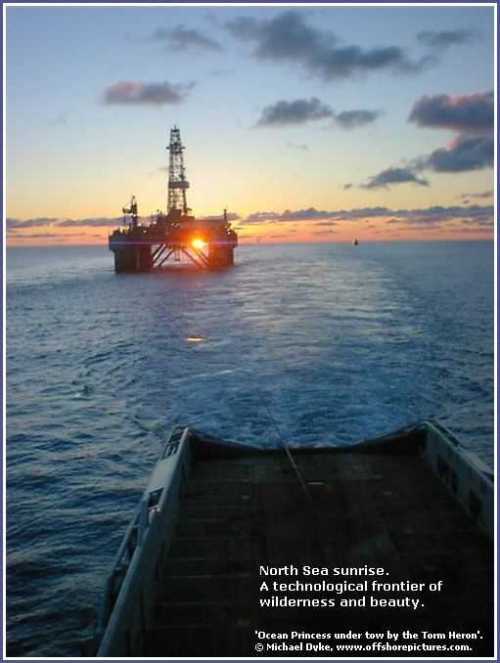 ‘Is the world running out of oil ?‘

It’s a question I hear a lot. At dinner parties, on school field trips, and always in taxis, pretty much anytime when I tell people I’m a geologist.

And I can almost guarantee what will come next. ‘The oil’s nearly all gone now, and the North Sea is finished, isn’t it ?‘ These are popular perceptions based on media reports, carrying elements of truth, but hiding the full story.

Almost 25 years after the first crude from the Forties field was brought onstream, North Sea oil production peaked in 1999. The North Sea is far from history, though, and today it still pumps 7 % of the world’s petroleum.

And global oil production has continued to grow right up to the present day. But does an oil price of $ 50 per barrel signal the imminent end of our oil supplies ?


There certainly is a lot more oil to be found in many areas of the world, within new, unexplored basins as well as in more mature ones like the North Sea. New technology to tap challenging reserves within the heavy oil sands of Venezuela and Canada also holds the promise of major new supplies. But whether oil can now be found at the same rate as we use it up, is an entirely different question. Global oil consumption continues to rise, but the volume of new discoveries is probably no longer keeping pace.

Scientists can detect the likely presence of oil in the subsurface by a range of different techniques, of which geophysical prospecting is one of the most important. But it is only when a discovery is fully evaluated by drilling that volumes can be estimated. Even then, estimates can be faulty. Whilst it is sometimes difficult reliably to measure the quantity of oil which has already been found but not yet produced, it is naturally much harder still to estimate the likely volume of oil which has not yet even been found.

What is slightly easier for companies, countries and the world to measure, at any given time, is the ratio of reserves replacement. This is calculated by comparing the volume of newly discovered oil accumulations (accepting some likely uncertainty in these figures) against the produced volumes of oil (which can be exactly recorded, at least in theory).

Shortfalls in reserves replacement may not immediately be evident, if producers are still able to increase production rates to meet demand. Certainly, producing countries have pumped more oil this year for just that reason. But it is critical to recognise that accelerating production does not alleviate the situation. In fact, in this scenario the reserves replacement ratio falls further and more rapidly, since production is raised by draining the existing fields more quickly, whilst no new oil has actually been found.

Once the global reserves replacement ratio falls below 1.0, it becomes increasingly certain and inevitable that the demand for oil will soon exceed supply, at least unless efforts are increased to find new fields. And since there is a significant time lag between the decision to drill and actual discovery, and a further time lag before new fields are brought onstream, whilst consumption continues apace all the while, then the realistic chances of new exploration being able to fill the gap may be limited.

It is probably within this brief time lag window that the world indeed finds itself during late 2004. Current trends indicate that global oil production is likely to peak soon after 2010. And it’s a problem which we just can’t afford to ignore, for all sorts of reasons, personal, industrial, social, geopolitical and environmental.

So what are the answers ? We need to generate more energy from alternative sources, not just because of climate change, but because we’ll soon have no other choice. Some will see a potential saviour in a resurgent nuclear industry, deciding to reconcile one environmental threat against another. Having some geological experience of the search for potential underground storage sites, I am always reminded that if nuclear energy is for today, then nuclear waste is for ever. ‘Safe’ storage is something of a manufactured concept, which does not meet many dictionary or technical definitions except those of expediency.

Are there other solutions ? Certainly, there are. Wind farms are loved by some, and not by others, but in fact the UK is fortunate in having developed much of the technology required to harness wind power, offshore. And we are blessed with a lot of wind. My own domestic electricity already comes from the North Hoyte offshore wind farm in the Irish Sea, nominally at least. The technology exists, today, and it works.

Solar power is also a practical possibility for some energy requirements, even in this cloudy island of ours. The price of hardware needs to fall, but this is already occurring as the price of conventional power rises inexorably. Hydroelectric energy is likely to remain limited in Britain, but tidal energy abounds around our coasts, even if we increasingly understand that meddling with the coastlines is a problematic pastime. The energy productive potential of a Severn Barrage would be enormous, but the environmental costs to habitats would be considerable. But invest we must, in all these things.

And as for that climate change argument – is it real ? Fortunately, or rather, unfortunately, earth scientists are pretty clear about that one. Carbon dioxide levels have risen by more than a third since the Industrial Revolution, and by 20 % since 1958. The rate of increase is around 1 % per year, and is accelerating.

But does higher CO2 really mean higher sea-levels ? The Earth is a complex system, and the science may appear daunting. But at the basic level, there is simply no doubt. The rock record clearly identifies relatively short geological intervals of icehouse climate and much longer times of greenhouse climate.

To put this in perspective, we need to appreciate that the present ice caps are relatively recent relicts from the Ice Age, itself less than 2 million years old. Before then, there had been no significant ice caps on our planet for around 250 million years. And throughout much of that time, global sea levels were as much as 200 metres higher than today. That is pretty straightforward to understand.

How quickly could sea levels rise ? If changes occur over millions of years, then perhaps we shouldn’t be worried. But in fact, even the recent geological past contains numerous examples of fairly rapid change. The latest retreat of the ice caps may have seen the global sea levels rise by as much as 100 metres in less than 10 000 years. Averaged out, that’s a metre every century. And that was an entirely natural process. Imagine how much faster these changes could occur, are already occurring, with so much help from us.

In 2004, the average North American consumer uses up more than their own body weight in crude oil, every single week. Can we really continue at that rate ?

The answer is clear, since even increasing oil exploration will probably only postpone the rate of production decline. And the problem affects the whole world, not just North America. And it’s not just oil supplies. Depletion of our huge Southern North Sea fields will soon see the UK as a net importer of natural gas for the first time since the 1960s. Global natural gas prices have risen faster this year than oil prices, although admittedly from a relatively lower base.

What can we do about it ? Get out of our cars, and back on our feet, for a start. Scrap that SUV, and buy a Mini, and a bike. Invest in, and personally support, wind and solar energy schemes, helping to bring them onstream as soon as we can. Find or develop other alternatives, like biomass and geothermal energy. Devise new ways to eke out our existing hydrocarbon supplies, making them last longer and reducing the environmental impact. Turn down the heating a degree or two. Buy a house on high ground. And hope.

So then, do you really still think that this geologist lives on a hill just because it’s good for running…. ?

Related articles:
105. A crisis of energy
128. October is a summer month
81. Helicopter Half Marathon – offshore survival
133. Tomorrow – Avril Lavigne and global warming
43. A sense of time – Earth history and the London Marathon