I was going to write another article about the oil price today, but I’ll postpone that for now. Sixteen people died in a North Sea helicopter crash on Wednesday.

Their Super Puma helicopter had flown 150 miles from the BP Miller Platform towards Aberdeen, but came down just 13 miles from the coast at Peterhead.

Eight bodies were recovered from the scene. Another eight may never be found.

The North Sea is at its coldest in spring, and it’s one of the most hostile environments on Earth. Helicopter passengers all wear immersion suits, and receive extensive survival training, but the window of survival in the water is very short.

Eye witness reports described the helicopter ‘falling like a stone’ — and in the case of an engine or transmission failure, that’s what happens when you’re flying without wings.

It’s a hazardous commute. In February, 18 offshore workers were miraculously rescued when their Super Puma came down in flat calm conditions just 500 metres from another platform, 125 miles east of Aberdeen.

But it’s rare to be that lucky. Seven offshore workers died en route from an Irish Sea gas platform just after Christmas in 2006. Eleven workers died when a helicopter rotor blade failed in 2002, and another 13 workers perished in a North Sea helicopter crash the year before.

The death toll since offshore flights began is now well over 100.

Amongst the millions of passenger movements from shore to platform and from rig to rig over the 40 year history of the North Sea, the fatality rate is mercifully low. But it doesn’t feel that way in Aberdeen today.

We need to find alternatives to hydrocarbons for a whole range of uses. We need to make much better use of the hydrocarbons we have, and stop squandering them uselessly in idle engines, inefficient cars and poorly insulated houses and wastefully lit office buildings.

We’re making slow progress in the right direction, but no magic replacements are going to be in place for some years to come.

Until then, there’ll continue to be a human price to pay for the oil and gas we use. In these days when big corporations are facing intense public criticism, sometimes it’s easy to forget where our fuel comes from, and all that’s involved. We fill up, we turn the key, and we drive off without another thought.

But finding petroleum, producing, transporting and refining it is a hugely complex and dangerous undertaking. Extracting hydrocarbons from the North Sea requires billions of dollars of investment in offshore infrastructure. Working offshore is not for the faint-hearted. 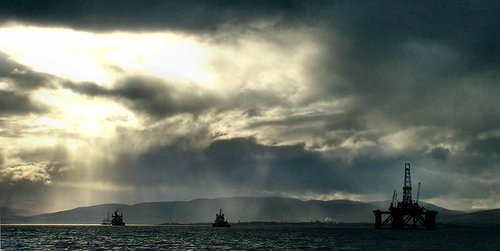 Given the technology, effort and expertise required, and even after heavy taxation, the cost of fuel remains remarkably low.

A pint of organic milk at Tesco’s supermarket costs 53p this week — 93p a litre. And a litre of petrol at Tesco’s filling station ? Just 92.9p a litre today.

That’s worth thinking about, next time a helicopter ditches into the North Sea.

This entry was posted in 2009, geology, heroes, history, Scotland, winter. Bookmark the permalink.