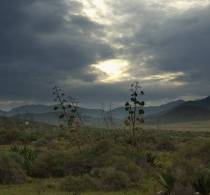 A cool, soft and forgiving kind of Spanish rain is falling.

I drift down the hill, easing into my pace and gently exploring that warm sense of anticipation which the early miles of a race can sometimes bring. There’s elation beneath my feet today. It’s hard to explain, but it fills the morning all the same.

This is the longest race I’ve run for two years, and my preparation has been meticulously disorganised. Steady, shortish lunchtime runs through Horsham. A nine miler every fortnight throughout the autumn. A 10km in November. Eight miles of the hilly Hogs Back Road Race in December. A two hour outing across the sunny Surrey Hills just two weeks ago.

My journey to the start line didn’t bode too well. A far too lazy start yesterday morning, followed inevitably by a wheezing mile-long dash hauling a heavy holdall at full pelt across the park at 5am to catch my airport train.

A long walk into Almería last night to buy the running socks I’d so rashly left at home.

At one time, I’d surely have worried about all those things. But today it doesn’t matter. I’m here to run, but it’s not about the running.

I’ve come to hold the hand of Spain.

At the bottom of the hill, the puddles are growing bigger. We turn right, and the race begins on the long slow climb up the Rambla de Almería.

I look around, and breathe it in, and it strikes me that everything about this street is different from how life is back at home. The palm trees.

The mountains rising up through the gloom ahead. The buildings, the banks and the apartment blocks. The sound of Spanish pop music playing beside the route.

The faces of the crowd look different, too. Rugged, bearded men in leather jackets. Ladies with their thick coats, immaculate pink lipstick and pale brown hairdos. The dark-eyed toddlers held up gently to marvel at the race.

The shouts of Animo! all along the Rambla. You never hear that in London.

I complete the climb and breathe back down again. Somewhere near the seafront, there’s a screech of police sirens and two elite runners rush by the other way. They’re halfway through their race, and I still have 15 km to go.

My target time? Two hours, or just a little more, and yet I’ve no plan, no running watch and no GPS today.

I plod further, past the bakeries and driving schools and blocks of flats and travel agents, dodging puddles all the way.

The rainy day of a Spanish city is running slowly past me.

The kilometres go by looking out for friendly faces. Three quarters of an hour in, someone offers me a whole orange (what am I supposed to do with that?) just as the fun runners peel off right. The field thins out by half and I realise that my legs are strong today. I know I’ll make it home. I pick off the first few slowing runners, and lose track of the distance markers.

We leave the main drag for a circuit of a garden suburb. The balconies of pretty Spanish terraced houses, hiding behind fig trees and unlikely tangles of electrical cables.

At the magnificent portal of a school sports centre, a bunch of kids is hanging out and laughing excitedly. I spy a policeman. A race marshall. A sports teacher. The ordinary lives of another nation from my own.

Back on the main street, I pass the 16km marker and run underneath the English railway. Just 5km to go — we must be missing out the Rambla on this second circuit — and I pick up the pace, just a little.

We round a corner, and unexpectedly we climb the Rambla after all. I put my head down. Ten minutes of breathless running brings me to the top.

Half way up I spot the 14km marker. The distance boards are out of order, and instead of 3km, there’s 7km left to go.

I try to kid myself that another twenty minutes of running will make no difference. But it does. By the time we leave the Rambla, the Avenida del Mediterráneo has grown twice as long as just an hour ago.

The climb beyond the railway yards is as taxing as I remember. I’d like to walk, but somehow I resist that urge. The field of runners has faded to a handful now, and we’re living different kinds of races. One runner comes back to me like he’s standing still, and another rushes past me at lightning speed.

As we run down the ramp and round the corner into the stadium, the clock is showing 1:58 with a full lap left to do. I put my foot down. Nothing happens, then suddenly I’m flying along the back straight and I can sustain a sprint from here. Try to kick again, but there’s  no one left to chase, and no one chasing me.

The clock keeps ticking over down the final 100, and the last few metres last for ever as they flash by within an instant.

Then suddenly I raise my arms and the line flashes past me. 1:59:51, and I’m delighted with that time.

And yet, it’s really not important. Less than two hours is all it took to run my race, but it’s a lifetime of appreciation which awaits me in the warmth of this Andalucían city. The taste of chorizo, manchego cheese and Spanish omelette.

A discussion with a store owner about running socks. Knowing how to ignore a menu and find the perfect plate of food from a friendly barman. A drive from Murcia past olive groves and orange trees and unforgiving desert.

A cathedral lit by floodlights in a silent midnight. A paella. Cries of Animo, all along the Rambla.

As often as I run this race, I won’t improve my time.

But what’s important is simply to return, to hold the hand of Spain and to enjoy all the time I’m here.

And that, amigos, is exactly what I did.

This entry was posted in 2009, racing, Spain, winter. Bookmark the permalink.