“Upon the whole it was an excellent journey & very thoroughly enjoyed by me; the weather was delightful the greatest part of the day…  to my capacity it was perfection. I never saw the country from the Hogsback so advantageously.”

So wrote Jane Austen of her trip along the Hog’s Back, in 1813. But today is a different kind of day. The view from the top shows nothing but fog. A December morning, chill, damp and misty. That’s how we live.

And yet, I can’t complain. An hour ago, I was still tucked up and fast asleep in bed. Thirty minutes of muesli, tea and fast driving delivered me to the start in Artington. Five minutes to jog to the start, another five minutes to score a race number, and I almost arrived too early for my geological odyssey. But not quite.

Time at the start line is always good. A few minutes to share notes on the course, and establish credentials.

A woman next to me is wearing London Marathon leggings from 2006. I ran it that year, too. Her son is a huge rower from Belfast. He’ll struggle on the hill, as will I.

And yes, the Hogs Back Race — it’s all about the hill.

The view of fog today comes at three miles in. A ten minute warm-up along the Godalming road, with a gentle leg warmer up a sandstone rise just before the Law School and the ancient Ship Inn. A slow cruise into town, and a sharp left as we come into Guildford, and onto the climb.

Two breathless miles follow, between the houses at first, and then playing with the traffic all along the Farnham Road.

This hill is a familiar enemy. For years it staked out the start of my lunchtime run from the office.

I work elsewhere these days, but once a winter I’ll force myself up the Hog’s Back to run back home along sandy trails of the North Downs Way.

These hills — they’re the reason that I live here. Their history is quite recent, and stretches way back in time. Deep beneath my feet lies one of the most important faults in England — since the Hog’s Back forms a geological dividing line at the edge of the Weald Basin.

And when sea swamped the land entirely, a thick band of Chalk formed from the bodies of billions of calcareous plankton as they settled to a tropical sea floor.

Sixty million years ago, a long way south of Godalming, the Mediterranean began to close as Africa drifted northwards, pushing Italy and then Spain before it like a pair of hammer heads driven into the soft underbelly of Europe. 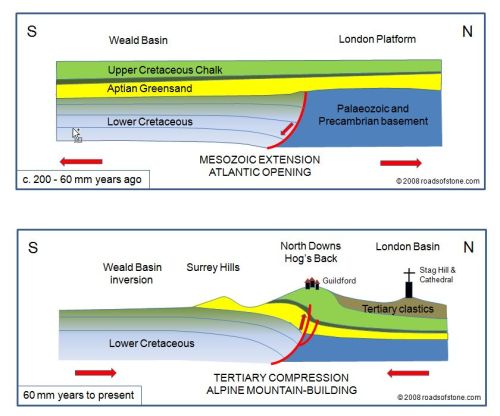 The Alps and the Pyrenees were formed, the earth heaving and the rocks buckling and shearing into fantastic folds and thrusts to form a mountain pile as tall as the Himalayas are today. And here, more than one thousand kilometres away, the crustal compression was enough to force the Hog’s Back fault into reverse.

The muds and sands of the Weald Basin were uplifted to form the Surrey Hills and the High Weald of today, whilst the Chalk was rucked up like a carpet into vertical beds within the North Downs beneath my house.

Great rivers flowed northwards now, laying down new sands and muds to fill the London Basin, where the London Platform once had been, forming the foundations of Guildford Cathedral which hides in the fog off to my right.

It’s a fantastic story — the geological history of the past two hundred million years defining the lie of the landscape I’ll run across today.

With so much to think about, the distance flows much more easily from here.

Fast running down through Compton, past the Watts Gallery and The Withies Inn and turning with tiring legs (fortunately) just before the cemetery, then on to Loseley House. That’s where the yogurt comes from, by the way.

Eight miles, a monster hill, one hour and thirteen minutes — all seen through two hundred million years of fog. So much for the Hog’s Back Race.

It’s all about the hill.

This entry was posted in 2008, geology, Guildford, racing, Surrey and Sussex, winter. Bookmark the permalink.