46. On the front line – Crawley’s echoes of Madrid

The London bombers of 21st July 2004 were convicted today, including Omar Khyam and Jawad Akbar, from Crawley.

(This article was first published here on 01st April 2004; see also the 7/7 attacks on London and further writing under Iraq).

Every week, since December, I’ve run this route. And all those months, I’ve run past that house, safely unaware that someone inside was planning to kill me. 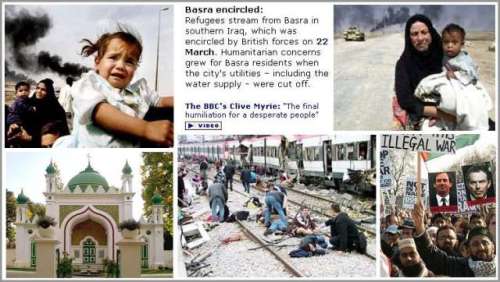 It’s just seven miles, but in many ways it’s a microcosm of England. Starting alongside factories, warehouses and office blocks, across the main road by the new shopping park, and through the bleak housing estates. From there into the more affluent countryside beyond – that cosy landscape so familiar to any traveller in-bound into Gatwick, looking down onto trimly-hedged fields, country hotels, black and white cottages, swimming pools, stables and stud farms.

Set into this green Sussex countryside lies the modern urban centre of Crawley. Built as Crawley New Town in the 1960s, the founding vision was for a kind of post-war suburban utopia. Trim houses, all the same, with green spaces, shops and schools in between. The factories and offices of thriving industry nearby. Technology in progress. And right up through the 1980s, this was a land of full employment, optimism and contentment.

It was in 1992 that John Major invented the stereotype of ‘Mondeo man’ as the critical swing voter of middle England, the middle income worker safely employed in light engineering and service industries. Mondeo man still lives in towns like Crawley and Luton, enclaves of former prosperity scattered around London and the Midlands. A workforce which had traditionally voted Labour, yet supported the Iron Lady right through the Thatcher years.

But the suburban landscape has altered since then. The Major recession of the mid-90s changed the economics of the south. It was manufacturing industry in the north which had always borne the brunt of any downturn, but now, for the first time, unemployment ravaged these once more comfortable towns. Those houses with Mondeos in the drive were repossessed, whilst the neat front gardens and net curtains hid many a tale of hardship behind. We live in more prosperous times again now, but Labour voters live here today.

And in the same span of forty years, since Crawley sprang up, Britain has become a multi-cultural society. The pretty country church at Ifield is frequented far less than the tiny mosque beside the airport feeder road. A range of mixed communities have developed. A delicate bilateral process of social integration and mutual understanding, starting slowly, but edging successfully forwards and outwards from the school playgrounds. Here a new generation of young Britons is emerging, with a knowledge, tolerance, and above all a pride in different cultures. Perspectives which would have been unthinkable even in my parents’ youth.

This new Britain looks now not just to Europe, just 50 miles away, but from here also to Asia and the wider world beyond. If French cuisine is still the best, it’s no coincidence that curry long ago replaced fish and chips as our national dish.

Was it really September 11th which changed the world for ever ? Often it seems like the events since have been more responsible for that. Britain’s involvement in Afghanistan and Iraq, sponsored by a Labour government, ran against the instinct of much of the population. Perhaps there wasn’t as widespread or unanimous opposition as in Spain, although the million-strong peace marches in London told their ample tale of public misgivings on the eve of war. There’s been endless government hand-wringing ever since, about WMD, about intelligence failings, restoring infrastructure to Iraq, spying on the UN, through the Kelly Inquiry to the Butler Inquiry, to whichever inquiry will certainly come next.

Whatever went wrong then, perhaps there’s not much point in complaining, since it’s history now. It’s unarguable that something had to be done. Most obviously a thoughtful change to foreign policy and renewing peace efforts in the Middle East. That didn’t happen, for a multitude of reasons, and it’s harder to hold hopes there than for a very long time. But what came instead, the military quest supposed to make the world a safer place, finally it has indeed achieved just the opposite.

We’d run just a mile of our seven mile route when this realisation really dawned. A glorious sunny day, with the first real warmth of spring. It’s been a long winter running through these suburban streets, all the same. My father-in-law taught in Crawley in the 1960s, and remembers that he could tell when a family moved into the town from their address, which reflected the development of the town. If their street was named after a tree, then it was built in 1966. If they came from a poet’s road, it was 1967. Explorers dated from 1968.

And yesterday’s run took us down Cherry Lane, close by the picturesquely-named, yet architecturally identical, Cedar and Pine Close, Chestnut Walk and Honeysuckle Lane. But it was on Juniper Road that I knew the world had changed. The patrol cars and closed-circuit television van parked in the street. The blue and white cordon of crime scene tape, the forensic equipment. The two armed officers standing on vigil outside this 1960s house so like every other in this town.

Here, and in other undistinguished suburban dwellings scattered around the capital, had lived a small group of 17- to 32-year old Asian British men, out-of-work, disillusioned and disenchanted, increasingly alienated by the actions of their adopted homeland. The traditional fodder for revolutionaries and extremists.

Simple tools, half a ton of ammonium nitrate and a battered white van. That’s all it took the IRA at South Quay in London’s Docklands in 1996. It’s all it takes now.

London’s Metropolitan Police Chief Commissioner was on TV last night, pleading for calm and entreating support from the peace-loving Muslim community. I’m sure he’ll get it. His reassurance that a list of strategic targets are protected. But London is the biggest target of all. The Madrid bombings, right here. Or worse.

In four months, I’ve run that route ten times. I’ve even taken 4 minutes off my time. But none of that is important. Because just four minutes from where I sit now, in the heart of suburban England, people have been planning and plotting to kill us all. If I ask myself why, it’s really because the answer is clear.

Hindsight is a wonderful thing. History is played backwards, yet life and its events unwind forwards. They’re two different things. Just as there are two different worlds, striving to meet, struggling to make one.

And here in Crawley, in London and in Madrid, we’re on the front line.

Related articles:
95. Going underground – the 7/7 attacks on London
71. How the West Was Won – Iraq implodes
59. Running in Crawley
91. Madrid me mata
17. It’s puzzling – a letter on Iraq, to Tony Blair
15. Sorrowful hills – the Space Shuttle Disaster and war clouds in Iraq

This entry was posted in 2004, Iraq, Spain. Bookmark the permalink.

2 responses to “46. On the front line – Crawley’s echoes of Madrid”