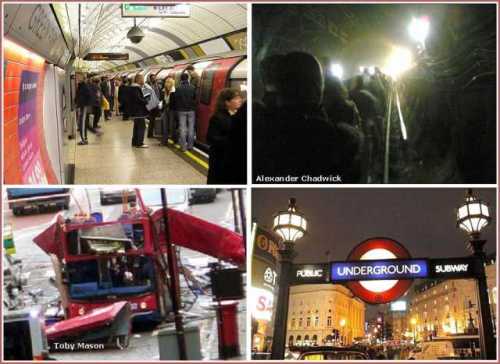 Hi Rick
Many thanks for your note earlier, as well as for your concern. It’s been a terrible day.

Fortunately, I wasn’t up in town this morning. Although I have been unaffected directly by today’s events, that is not to say that I have been unmoved. It has been quite simply the most remarkable and poignant week in London that I can ever remember.

We had the biggest and best rock concert in the world here on Saturday, prior to the G8 convening in Scotland this week. Then yesterday, Bono and Geldof met Blair and Bush to present the world’s largest ever petition, for the cancellation of African debt, before returning to another huge live gig in Edinburgh’s rugby stadium. It looks like there is going to be a deal on African poverty. Many trade issues still need to be resolved, especially concerning the phasing out of subsidies paid to European and US farmers alike. Likewise global warming remains a point of puzzling contention in balancing the case for economic growth against the obliteration of the planet.

These debates will rumble on for years to come, but one has the feeling that slow progress is being made in convincing the minds that matter that something’s gotta change. And if ever anyone doubted the power of public opinion before, surely no one will doubt that again after Hyde Park. That one achievement alone in reaching agreement on African debt will be absolutely huge, and it has been masterminded here in the streets and parks of London.

Then yesterday we had the fantastic joy of receiving the nomination for the 2012 Olympics. I can’t even begin to tell you how much this means to the people here. Not just because we Brits are passionate about athletics and about all our sports, but because it is going to transform London – already the most multi-cultural city in the world – by regenerating vast swathes of the run-down East End. As you know, I’m originally an East End boy (that much at least I share with David Beckham). I can now have dreams of West Ham one day running out to play regularly in the Olympic Stadium, at least unless Arsenal get there first. But it’s much, much more than that – this is simply the biggest gift that this city has ever received.

And now, this morning, we have seen the awful attacks on the Tube in London. It might sound strange to you at this distance, but I must tell you that not a single person I have spoken to is in the least bit surprised that this has happened. No one thought that it would be today, of all days, but after the attacks of 2004 in Madrid, then we all knew, deep down, that it was only a question of time.

What you have to remember is that London has experienced this before. We are not New York, for the most part until 2001 having lived a largely sheltered life, and then one sunny morning suddenly waking up in shock to the realities of political violence and terror. We have all lived through the IRA attacks with massive loss of property and civilian life for decades now – ranging in scale from the bombing of a pub in my present home town of Guildford in 1974, to the destruction in 1992 of the historic Baltic Exchange, where the Gherkin now stands in the financial centre of the City, and then the ripping apart of South Quay in London’s brand-new Docklands area in 1996.

I am very sad to say it, but this is undoubtedly our ‘punishment’ for Afghanistan and Iraq. It is ironic in so many respects, really, when this is such a free-thinking and diverse community. Not just because all nationalities of the globe are represented here, so that any attack is necessarily indiscriminate in its impact on people of all races and religions, but also because in fact London was the centre of the world’s anti-war campaign. One million people marched in this city against the war on that one day in March 2003 which forms the memorable backdrop to Ian McEwan’s latest novel which is simply entitled ‘Saturday’.

Two billion people around the world watched the concert from London last weekend, and it is undoubtedly because of that event, because of the unceasing campaign by Ireland’s Geldof and Bono, and thanks to the massive and long-standing support for their cause by the British public, that world poverty is an issue which is being discussed by G8 in Edinburgh at all. Whatever the mistakes made by the politicians, the wider world has a lot to thank the innocent people of London for.

Security has been high in the financial centre for years now. The ‘Square Mile’, the historic Roman heart of this city which houses the world’s financial institutions, has been surrounded by a ring of steel since the mid 1990s. But no one can completely prevent that kind of violence and murder which is perpetrated by misguided souls who are so determined to die for their cause.

It is obvious that the effects of today will be felt for many years here, and that they will echo around the world beyond. What might not be so clear from afar, but is every bit as true, is that they can close the stations in London, shut down the Tube, blow up the buses, bomb out the offices, and yet the people here will continue to find a way to carry on.

We’ve done it before, and I’ve lived through it, too. It was the IRA then. Now, today, the threat comes from an entirely different, more serious and more dangerous source, and is even more unjustly targeted.

But I can tell you now – I am certain that this city will not be bowed. 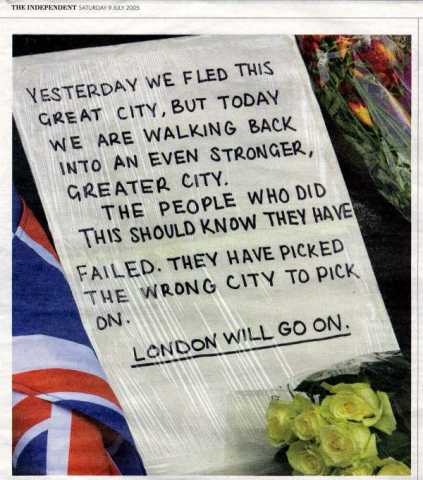 Yesterday morning I was puzzled to notice that my normal bus route had been slightly modified to avoid travelling underneath the South Terminal at Gatwick Airport. I was just pondering the interesting, if distinctly discouraging, deduction that this change was designed to minimise fatalities in the event of a suicide bomb attack, when I noticed that the next passenger to board my bus was a bearded Middle Eastern gentleman with an absolutely enormous suitcase. However unjust, it is sometimes hard not to think the unthinkable….

Fortunately, he must have seen what was going through my mind, since he caught my eye and smiled.A few hours later, I found myself up in town for an afternoon meeting. First trip to London since the attacks, and although there was still no Tube available northwards from Victoria station, I’d already decided that it was definitely going to be a fine day (even if wet) for walking through Green Park to Piccadilly. It turned out sunny, and I rounded the day off by ensuring that the beer supply was still functioning in that pub just off New Bond Street.

It was only after taking a taxi at sundown to Waterloo that I sheepishly surveyed the two unused Tube tickets in my carnet. Still plenty of time to use them before they run out in August, I whimpered spinelessly, convincing no one in particular.

Ten hilly and sweltering miles on Sunday evening amidst the peace of the old drove road along the top of the Downs from Newlands Corner. My longest run since March. Six miles in Crawley on Monday, and a blisteringly hot (if not blisteringly fast) speedwork session today. Perhaps I might take to this running lark, given time.

We can but carry on. If we dare.

Related articles:
46. On the front line – Crawley’s echoes of Madrid
15. Sorrowful hills – the Space Shuttle Disaster and war clouds in Iraq
17. It’s puzzling – a letter on Iraq, to Tony Blair
71. How the West Was Won – Iraq implodes
84. Election Special
148. Farewell to Tony Blair

This entry was posted in 2005, A1 - the best of roads of stone, history, London, music. Bookmark the permalink.

One response to “95. Going underground – the 7/7 attacks on London”