96. Jude Law and the Dirty Deed

It must have been just after 1 am on Sunday when Jude Law called. Of all the people to phone at that time, he seemed the very least likely, but it wasn’t really me that he wanted to speak to. 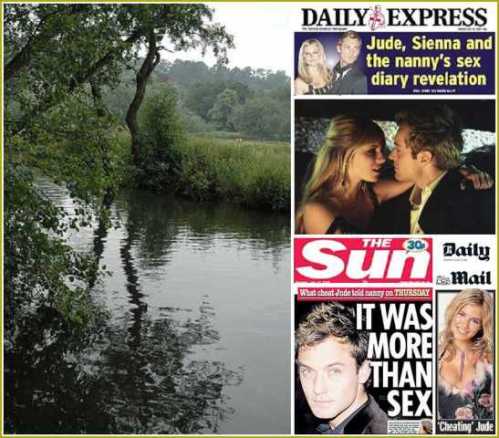 He was having some trouble with his childcare arrangements (allegedly) and although I might well have offered a view, it was our houseguest he wanted to reach for advice.

And it only took a glance at the next morning’s papers to conclude that, for all of my experience in sorting out problems with nannies, even I couldn’t have helped Jude much on this occasion.

It was an odd time to awaken after an eventful day. I might have still been up, if I hadn’t ‘unexpectedly’ run twelve miles earlier, but now, as I lay there, surprisingly alert, I wasn’t sure – had I really planned it, or did it just happen ?

The truth is, as Jude himself might agree, sometimes trickier to define than it should be. I had an hour or two mapped out, that much is true, amidst the frantic preparations of a summer party at home. That specially tense time when you’re damned if you stay in, and damned if you don’t. I didn’t, and I certainly was.

But I wasn’t to know that then, as I laced up my shoes and headed out into the morning. It was hot already, but more than anything it was bright – the sky shimmering in that clearest of midsummer lights I’ll always associate with the south of France. The kind of sunshine where you see old men sheltering under the shade of lime trees in the Place de la République, drinking pastis with earnest endeavour, only taking brief respite from such exhausting sport for half-hearted ends of pétanque.

Exactly that sort of day, in precisely that heat, and I was running long for the first time in ages. It wasn’t exactly planned, but I knew that if it was going to happen, then this was the only way the dirty deed could be done. An unplanned lapse it was, yes – yet something of a meticulously pre-meditated kind of lapse, too.

If the timing was fixed, then my route certainly wasn’t. I haven’t run long for a year now, with partly injury, and partly lethargy to blame. Growing tired with all of my old long routes hasn’t helped much either. North, south and east have all been endlessly explored – their contours analysed, their trails investigated, their flat itineraries all identified. Only the west remained as significantly untrod – the harsh slopes of the Hog’s Back above the town acting as a deterrent to further forays, and the steeply undulating sandy ridges below not offering much more temptation. In setting off to run there, I didn’t mean anything by it – really, I didn’t. I simply needed the gratification of a climb, and there it was, offered.

A few minutes later and I’d already disgraced myself on the hill above the Ship Inn. I was hot, and now breathlessly looking for more. The meadows to my right looked suddenly cooler than the lane, and whilst the long warm spell hadn’t done much for my running recently, at least it was dry underfoot. The meadow grass was already well beyond yellow, the marly earth white and cracked beneath. Perfect for running, I reasoned, selecting a promising path in the direction of Loseley House. A couple of fields, a few moments lost in lushly ripening maize, and I’d plotted a circuitous route through the hot streets of Compton to join the North Downs Way. Under twin bridges of the A3, and on through a dark forest before finding myself, buried like a lost Titleist, deep within the trees lining the fairways of Puttenham golf course. Would my wayward drives from last year’s round still be there, I remorsefully wondered ?

Probably not, I figured, loping on repentantly and with good intent towards the village pub, uncannily called ‘The Good Intent‘. A footpath from here was sought, and finally found, stretching over green fields once more. There was still only the glimpse of a plan in my mind, a far from fully-formed view, of finding a path somehow back to Guildford. So when the mirage of Shackleford appeared in front of me, it proved sadly little help, knowing as I did neither its location nor that of any of the villages signposted from its pretty cross. The geologically-enticing Chalk Lane lured me for a mile, before kicking me out again unceremoniously onto the main A3 trunk road. No choice for it now but a long sorry skulk back into town. Head down, and run. So it was only when the wrong turn-off loomed, much later, that I realised both my route and my day were now headed erroneously south.

Some seriously hasty mid-course corrections were applied, another steep hill was tackled and crested, and I was becoming ever more confident of finding both Godalming and that inevitable domestic roasting ahead. But what was this miracle – a bus approaching ? My watch showed 11.99, then a magical 12.00 miles, so I hopped on most gratefully. With only £3.20 in my pocket, a £2.80 fare home offered the potential for forgiveness in life-saving proportions. And the prospect of arriving no more than half an hour late at my own party – that much was priceless. Yes, I’d been lost at times, but my day had turned out so much better than Jude’s.

Two weeks on, and my injury fears have sent me on long rides in place of weekend runs. It wasn’t quite the Col de Galibier or Mont Ventoux, but the Pass of St Martha was humbled on Saturday, and the previously-unconquered Longdown Hill fell under my front forks the same day. So finally, when the opportunity for more mischief arose again last night, I knew that neither wisdom nor a murky horizon could stop me from building on that earlier run, whatever the consequences.

A couple of dead-ends and an A3 excursion were eliminated this time, only to be replaced by new loops through a rainstorm. I hadn’t expected to flirt clueless laps with the dusk of a River Wey floodplain, but that’s precisely what transpired. And on other nights at 10 pm, a lonely half hour spent under damp and cold streetlights on the A281 might have seemed morally questionable, but somehow not tonight.

Because after an off-road odyssey, the last miles of wet pavement screamed of unbridled delight like the fastest tartan track as my mud-stripped shoes tested the temptations of speed. My homeward hill loomed, as wickedly as ever, but for once its torments were bravely confronted and firmly dispatched. It was a great run.

And so, at 17 miles with rain-soaked kit, mud-splattered legs and bramble-torn calves, my dirty deed was done. Just like for Jude, it’s too early to see how it’ll all work out. And if I’ve got away with it thus far, there may still be turmoil ahead. I’d best keep it quiet, so please – don’t alert the Press.

Related articles:
83. Seven Bridges Road – the Wey floodplain
58. Running in the North Downs
56. Paris – a view from the Champs de Mars
100. Half a million steps

This entry was posted in 2005, summer, Surrey and Sussex. Bookmark the permalink.