The October sky is grey and dank and the Zürich morning still half dark as I emerge into Weinplatz. The first leaves are scattered around the square, and at this early hour the weather looks unpromising.

The summer’s smug geraniums still adorn the hotel windowboxes, but they’re looking limp and vaguely threatened now. Autumn is brief here in Switzerland, and the winter’s not all that far away.

Behind me, the River Limmat is swirling gently northwards on its way to join my old friend the Aare near Brugg, and then onwards to join the Rhine for Basel, Germany and the sea. Tall churches and pretty wharfsides beckon beside the river, but for now I leave the waterfront behind me.

I know my way round here, in the biggest small country in the world.

A few moments later, I turn onto Bahnhofstrasse.

One of the great shopping streets in Europe, this wide and clean-swept boulevard stretches long and straight and wide from the station to the lake. Expensive shops and banks line it all the way.

There’s very little traffic – just an errant Mercedes or two. The Zürchers generally go about their business by bus or on the tram.

With one of the most efficient and well-integrated public transport systems anywhere, in city life you scarcely ever need a car.

Ten minutes beside the tram tracks brings me down to reach the shore. Lake Zürich stretches southwards – silver coast to my right and gold coast to my left — its waterside properties offering some of the most expensive real estate in Europe.

A short drag along the busy promenade brings me east towards the river bridges and I double back beside the Limmat.

The day is brightening now, as the Hochnebel – the high grey and gloomy valley fog so typical of a winter in the Swiss Mittelland – is showing promise of lifting later in the day.

Years ago, when I came to live in Switzerland, the first German I learned was from the weather forecasts on the radio each morning. In der Niederungen, Hochnebel, in den Berge, sonnig. Niederschlag im Westen. Schneefallgrenze steigend über 2000m.

Fog in the valley, sun in the mountains. Precipitation in the west, and snowfall limit rising above 2000m. As an Englishman marooned in Switzerland, perhaps it fitted my own nationalistic stereotype rather perfectly that at least I could talk about the weather.

I trot a while through Limmatquai, gazing on a fine array of spires and elegant sandstone buildings across the river, and then I head right into narrower streets lining the hillside up above.

Amongst the maze of alleyways lurk familiar-looking shops, bars and restaurants, and suddenly I begin to covet an unlikely plate of Bratwurst and a cool Feldschlösschen Bier.

Finally, I settle for a swift sprint downhill and back across the Rathausbrücke for a more sedate Swiss breakfast of Birchermuesli and Toni yoghurt with a copy of the Neue Zürcher Zeitung to digest with my coffee and croissants to come.

Perhaps the Tages-Anzeiger would be less strictly highbrow and easier, too, for this Englishman to enjoy without a thick dictionary to hand. But the NZZ reads well today.

The sky is clear and crystal blue by the time I’m at my meeting, standing in an elegant Zürich Kursaal with a fine view across the Limmat. 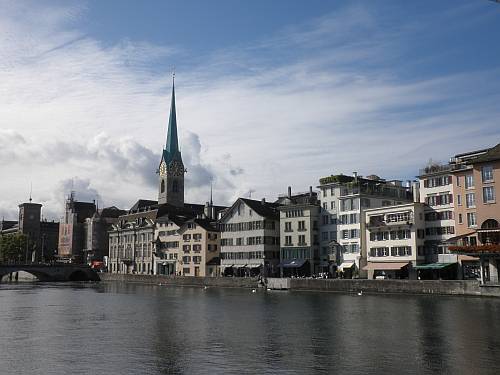 I’ve given this presentation at least a dozen times before, but today I decide to start in German. I lived not far from here for quite a while some years ago and frankly I need the practice.

But while I may think in best Hamburg Hochdeutsch, as I open my mouth a familiar gurgling comes out. I succeed in introducing myself not just as a one-time resident of Bern, but as that much more rare and hilarious beast, an Englishman with a strong Swiss accent.

For soccer fans who remember Peter Schmeichel’s Danish Mancunian, or his countryman Jan Molby’s Scouse, the full comic effect is easy to imagine.

The hard part of the day now safely done, I can enjoy my lunch more easily, and strike up a conversation with my Swiss neighbour at the table.

‘It’s interesting that you lived in Switzerland,’ he says. ‘Of course, that won’t help you now.’

‘Why not?’ I ask, puzzled for just a moment.

‘It’s klar,’ he replies. ‘In Zürich, we don’t think much of anyone from Bern.’

I look for a trace of a smile upon his face — or even some tiny crease around the eyes, to tell me it’s just banter, or that this comment carried a hint of mirth.

But there is none. He’s entirely serious, or certainly, more or less. I look around me in the conference room, and see I’ve been put firmly in my place. Because this really is the biggest small country in the world.

The afternoon wears thin, and soon it’s time to head for home. My colleagues muse a beer, and a taxi to follow, but I know that’s not the way to go.

It’ll be greener, cheaper, healthier (and probably quicker, too) if instead I walk to Zürich main station and catch the airport train from there.

I’ve a kilometre to walk and a little time to spare and so instead of Bahnhofstrasse I wander up the narrow lanes through Schipfe beside the left bank of the river. And duly I’m rewarded with a wonderful view of Zürich from the Lindenhof, a small park atop the bluff.

This is the oldest part of the city, first settled by the Romans in 15 BC and probably by the Celts before them.

Not far away I find a display recording a gravestone from the 2nd Century showing the oldest written reference to the town founded by the Romans (Turicum) at the ancient crossing of the River Limmat.

This mediaeval city has a much more ancient history, and I never knew it. A dawn and dusk of tracing footsteps beside the Limmat have turned new pages in my own Swiss story here today.

For Andy, wishing you all the best in Switzerland.

This entry was posted in 2010, environment, life and times, Switzerland. Bookmark the permalink.