China. America. Russia. The world order changed this August, as I’m sure you must have noticed.

I found myself in Greece for the Olympics, back where it all started. Four years late for Athens, and half a world from China.

Yet Beijing reached right around the globe this month. Strolling by the beach on a hot summer’s night, the first images I saw were on a gigantic screen installed inside a bar – a mesmerising, spellbinding sequence from the opening ceremony.

Throughout the next two weeks, the dramatic scale and serenity of the show grew and grew.

Each evening I would return to catch another glimpse of something fantastic, incredible, and Earth-changing – the opening up of China to the world, the swallowing of sport and the dawn of a new century on this planet.

And sometimes, I just watched the swimming.

Beijing’s games were remarkable, forging great memories to hold onto for many years to come. Who will ever forget Michael Phelps, surely the greatest ever Olympian, winning gold medal after gold medal in the Water Cube?

We knew already that Phelps was in a class all his own, but in Beijing he had to dig deep and fight for victory at times – relying on the force in his fingertips in the 100m butterfly, and the heroic efforts of his American anchor man in the 4x100m freestyle relay. And yes, he won six other golds as well.

On dry land, the Jamaican lightning, Usain Bolt put clear distance behind him on the track. The 100m world record is rightly his (assuming he is clean), and, even more excitingly, it seems he can run even faster. But perhaps it was his claiming of the 200m world record held by Michael Johnson which really underlined his greatness.

Across so many sports, China dominated. The huge effort they put into the games warmly merited their place atop the medal table (even if the US strangely felt the need to recalculate the maths – compare these international and American versions from Yahoo). 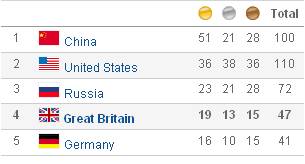 It was a remarkable Olympics for Britain. The most gold medals for a hundred years – due reward for new initiatives and investment put in place after Atlanta twelve years ago, when a solitary rowing gold was the only laurel gained.

That rowing success continued. Redgrave and Pinsent’s tradition was honoured in the coxless four, with a gold medal hauled home from an unlikely deficit with 500m to go. Six golds in all, and the Olympics closed with Britain as the leading rowing nation in Beijing.

The sailors set high standards, too, led by Ben Ainslie winning his third Olympic crown, but it was our cyclists’ seven golds which impressed the most.

Nicole Cooke claimed the Olympic road race – a title so well deserved and so hard even for a giant of the sport to win. Already winner of the Giro d’Italia, the World Cup, a Commonwealth gold and the women’s Tour de France (twice), yet still unassuming and unsung at home, Cooke will finally find better restaurant tables now.

In the vélodrome, Chris Hoy and Bradley Wiggins scaled and surpassed the feats achieved in Barcelona by Chris Boardman, who deserves huge credit for his inspiration to the team.

In the pool, too, we found our own answer to Phelps in Rebecca Adlington from Mansfield.

This smiling, round-faced double Olympic champion might almost look happy selling sandwiches in a bakery, and yet she found the filling to slice Janet Evans’ last remaining world record by over two seconds.

Short of another six gold medals or so, that’s a greatness which is hard to beat.

In the athletics stadium, Phillips Idowu’s disappointment with silver in the triple jump marked his continuing progress in Jonathan Edwards’ footsteps, and with the British team experiencing frustration in the relays, Christine Ohuruogu’s 400m proved the only track and field gold flown back to London.

Sebastian Coe might justifiably ask for more from the London games he will deliver in four years’ time, but it’s good to know that the success of Team GB will now silence those critics of the expanding budget for 2012, for a while at least.

Yet the medal table tells only a small part of the story about Beijing. Because surely, this picture is on a far larger scale, just like those huge images of the opening ceremony which called to me in Greece.

The continued and accelerating rise of China as a global power is certain now. Welcoming the world, China took criticism for her policies on human rights, on Tibet, and on environmental issues. In hosting these Olympics, China risked so much, and yet she raised herself to meet and far exceed that challenge.

For China, seven years planning for these games have not been wasted. China has invested throughout that time in new infrastructure, airports, stadia, and preparing to meet the world.

For our part, we’ve spent seven years manufacturing airport scanners and sending armies across the globe in a futile fight on rising fuel prices.

Beijing’s 2008 Olympics have changed far more than sport. The brave new face of China smiled into every household on the planet this month. And as our backs were turned, Russia resumed her beary growl in Georgia, seeking new influence at the borders of her diminished Empire, in places that we just can’t reach.

Simply put, the world looks different from how it did before.

And so on to London in 2012. Our city’s part in the closing ceremony in Beijing was as unpromising as it was incidental to the grandeur and drama of these games.

But lessons can still be learned from our twig-like presence inside the birdsnest. Just three years after 7/7, whoever thought that an exploding London bus should form the centrepiece of our handover clearly needs to think again.

All that twirling of umbrellas, parading our British fascination with the weather – surely only promised that it’ll tip down with rain throughout our games.

Perhaps it will, but only time will tell. For now I’m off to sign the list of London volunteers. Olympic stories come in many shapes and sizes, and this might just be mine.

London’s games will be different, smaller, and less imposing, but as in China this month, they’ll form a showcase for our country, all the same.

Just four years to go now, and we’ve a lot of work to do.

This entry was posted in 2008, A1 - the best of roads of stone, heroes, history, London, sports, summer, travel. Bookmark the permalink.