A cold late summer evening, thirty two years ago now, the failing light still dim across the expanse of time. We’d just left our holiday in Northern Italy behind, and were driving homewards, out of the rush that is Torino into the deep and dark Aosta valley. Dusk found us atop the Grand Saint Bernard Pass, just inside France. Hannibal had passed the other way, with his elephants, from Carthage to Rome two thousand years ago. Another famous general had also clearly stayed here, as the hotel we found perched high in the cooling mountain air advertised itself as Napoleon’s Bivouac. 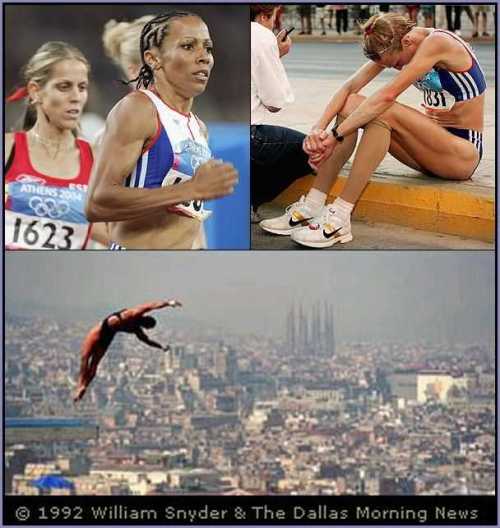 This young boy, bleary-eyed and assaulted by novel aromas of Alpine cheeses, pizza, and something else I can only now define as essence of mountain hut, sat hungrily down to dinner way past his bed-time. But the overriding impressions came not from the food, nor even the place, but from the scene playing out in front of a rough crowd of locals and tourists.

One and all, we stood or sat, transfixed around the television as a young Olga Korbut changed gymnastics, and the Olympics, for ever.

There had been other Olympic moments to cherish, for sure. Mary Rand and Lynn Davies had each won the long jump in Tokyo, and although I can’t remember either event, the 1964 theme ‘Good Morning, Tokyo‘ floods willingly through my brain right now. David Coleman’s emotional commentary on Anne Packer’s 800 m victory has also been played so many times, that my mind tries to deceive with its replay footage, stored long after the event.My first real, live Olympic memory, was from David Hemery, winning the 400 m hurdles in Mexico, four years later, with a panache fitting to his fighter-pilot style. I was even more impressed, although at the age of 7 still not knowing why, by Lillian Board’s silver medal in the 400 m. Her death just two years later, from cancer at the desperately young age of 22, was in some ways a turning point for me, bringing my first realisation that young people could actually die, and that the world was not a fair one for all.

But it was in Munich, with Olga, that my appreciation of the Olympics came of age. Returning home for the close of those games left me with other defining memories of that Olympiad, from the Black September siege. The death of eleven innocent athletes brought another revelation that sport and politics can cross in undesirable and sometimes violent ways, an experience borne out through 1980s boycotts, explosions in Atlanta, and even the interruption of the marathon by a mad Irishman in 2004.

Montreal, 1976, was the year of Lasse Viren, Alberto Juantorena and Edwin Moses. Some years later I had the pleasure of running around the warm-up track outside the Olympic stadium, listening to their echoed footsteps. Each succeeding games stored more images – Alan Wells winning the 100 m in Moscow (who cared then, that the Americans were missing following the Russian invasion of Afghanistan ?), Coe and Ovett lapping the art deco stadium at Los Angeles in 1984, Ben Johnson and Carl Lewis in Seoul, 1988, a silhouetted diver soaring above the Catalan rooftops in Barcelona, Sally Gunnell and Linford Christie wrapped in Union flags after track golds at the same games in 1992. Atlanta – Roger Black coming second in the 400 m to a golden-footed Michael Johnson, Sydney and Cathy Freeman, and Redgrave and Pinsent spilling guts and tears enough across the years to fill six rowing lakes.

It’s a lot of memories – a movie’s screenplay of heroic victories and glorious defeats, seasoned with large measures of Realpolitik and catastrophe, and laced with the flavours of different places and different times.

In 2004, as I left my Caribbean beach to catch glimpses of these Athenian games, I wondered if my perspectives would have changed. Would the persistent drugs scandals have taken away the spirit of athletics competition ? And since the entire span of my competitive running career had fallen in those brief years since the last Olympiad, would a runner’s outlook change my spectating ? Would I rather not spectate at all, finding less fulfilment in watching now than I did in running?

The fan within me was still there. The fan I always have been, and always will be. But my appreciation of these games, and of athletics, had changed. I felt it more. Every time you compete, regardless of whichever or how many sports and events you experience, you’ll identify more closely with the players in the game.

So many years of disappointment had gone into Kelly Holmes’ dual successes in the 800 m and 1 500 m, that it was hard to believe we were watching the same girl. Less than six minutes of running was all it took to transform herself into the greatest of champions. Decisive finishing-straight strength was the gift she found, but fortunately not at the expense of grace. If we British love a plucky loser, it was gratifyingly still the same Kelly who came good in the end.

The real beauty of her victories was not just that they were stamped through with the authority, class and faultess execution of a Michael Johnson race, but that they were gained through tenacity, courage, and ultimate self-belief through adversity. And surely these scenes were all the more poignant, the emotions of achievement and release more vivid, contrasting as they did so soon after that other scene. Those explicitly brutal images playing out the gut-wrenching disappointments of a broken champion, sitting distraught and disconsolate by the roadside.

“Some days you run the marathon, and sometimes the marathon runs you“. That is one truth which Paula Radcliffe has also now learned. Things will never be quite the same for her. They might be worse, or they might be better, and only time will tell.

It’s worth remembering, though, that just like Kelly Holmes’ successes now, Paula’s marvellous 2002 and 2003 seasons followed what were difficult times. It was the impetus of a disappointing 4th place in Sydney, having led the 10 000 m most of the way around, that made her resolve to work harder and to transform herself into a winner.

In London and in Chicago, she had seemed invincible. In Athens, we hoped she would still be. But no one can win every single race they enter, not even Paula. We are all human, and ultimately the marathon respects no one. Reputations and expectations mean nothing in comparison with harsh reality on the road. She made no excuses, and could only apologise. I, for one, have brushed with harsh reality in too many far less demanding marathons to be left with anything but respect for what she has achieved, and sympathy now for her disappointments.

It has amazed me, then, these past few weeks, to hear so many people protest that Paula Radcliffe had let them down, had angered them in some way, by not finishing the marathon, and then by entering the 10 000 m and not finishing again. And whilst finishing will always be the fundamental and priceless goal of any marathon race for me, I can feel no shame for Paula, even in not completing the course. Paula has simply given too much, for us to think of complaining now.

Why did it happen, and where did she go wrong ? The hot and humid conditions surely played their part. Maybe her condition on the day was not all that it might have been. Maybe the hilly course would never suit a runner who was taller and heavier than all of her rivals. Perhaps it was a combination of all of those.

More likely to blame, I felt, was the strategy she chose for this marathon. In respecting the course, and not starting out fast, she inevitably exposed herself to the strengths of other runners, and to her own tactical and mental weaknesses, as she never had in a marathon before. Running hard from the gun, she would have decimated her opposition and played to her own strengths by dictating the race from the front. Because for all her world-beating endurance, Paula Radcliffe has never won a race from within the pack. And despite all of the acknowledged risks lurking on that hot road from Marathon, it was mystifying that she thought she could, or somehow should, try to do so now.

Will Paula come back from here ? It’s hard to tell. It is certainly possible that Paula may be another athlete whose best years fell between Olympiads. Several British distance runners have fallen in this category – Brendan Foster, David Bedford and Steve Cram, to name just three. Each was the best in the world for a time, but just not on the day the Olympic gold medals were handed out. They were still great athletes.

Each of these ‘failed’ champions has contributed enormously to athletics, inspiring the Great North Run, directing the London Marathon, and enlivening the BBC distance running coverage. They owe nothing to their sport, and for all that she has achieved, and failed to achieve, neither does Paula.

So what do I, this eleven-year old Olympics fan of thirty two years standing, take from Athens 2004 ? Perhaps that if we are to learn, then every hard lesson must form a useful step along the road. It was William Blake who wrote in 1793, that “Without contraries is no progression”.

These two scenes offer contrasting images from the careers of two great athletes. And yet, for all their stark contrasts, they do belong together, indeed they must belong together, in the panoply of every Olympiad. For it is together that they have the power to define the meaning of sport, the pleasure of watching it, and the point of participating in it. And for sport, you can read life as well.

I found this quote from the Landmark School of Maryland: “In truth, what really is important about athletics is to have fun, to fight adversity, to risk failure, to get up when you are knocked down, to compete as hard as you can, not to use excuses, and to learn how to win and lose gracefully.” In Rudyard Kipling’s words, to experience triumph and disaster, and to treat them just the same.

This entry was posted in 2004, A1 - the best of roads of stone, Greece, heroes. Bookmark the permalink.