The oldest regularly-held sporting event in the world reached its 153rd edition in London last Saturday, and I was lucky enough to watch the coverage along with millions all around the globe.

The Oxford and Cambridge Boat Race, from Putney to Mortlake.

Rowing – it’s a sport I know so little, which taught me so much of what I know.

Now I could tell you that sport is all about fitness. I could tell you that it’s about improvement, and dedication and companionship. I could relate the heightened mental acuity felt by the long distance runner, show you the slow-motion symmetry of a perfect iron shot towards the flag on a silent summer’s evening, or try to describe the sound of a mountainside half-shrouded in cloud.

Sport might really be about all of those things. But I know that’s not true.

It was rowing which taught me that lesson. It was the summer I spent doing this. The summer when I learnt that sport is all about fear.

Last Saturday afternoon, at 4.30pm precisely, sixteen oarsmen and two coxes set out in two boats along the Thames. They’ve been racing each other since 1829, a few early gaps and wartime years excepted.

It’s an enormously demanding contest, staged over the eccentric distance of 4 miles and 374 yards, often in stormy conditions. Nearly every year, oars clash. They are often awash, in appallingly rough water, and every so often, boats even sink.

There are only two teams in this little league, but nearly everyone has a favourite amongst them. And after so many years, the tally of victories is incredibly close (let’s leave the fine detail just a little vague there, for now).

Some say that the limited field defines an elitist and exclusive contest, and I may be biased here, since I really don’t take that view. With a dozen international oarsmen taking part every year, and Olympic and World Championship medallists amongst them, there is simply no way in here for privilege.

Now you can watch rowing at the Olympics, or in great regattas like Henley or Lucerne. Sometimes, those races have close finishes, and with so many great British rowers like Redgrave, Cracknell and Pinsent, we are used to the excitement of seeing our compatriots win. But for all of their prestige, those are tactical, staged races, run in laned-off lakes, within straightened and stilled stream reaches and on a gaggle of geometrical ponds.

And let me tell you – racing on open water is different. It’s a new world entirely.

A river is wide, and curvy, and unpredictable. It has waves. And currents, and streams and flows. Even traffic, from time to time. You can steer where you want, within reason, for advantage or loss. And in open water, there is no room for shrewd tactics, or logic, or planning, or carefully-timed attacks.

Because rowing on a river, head to head, is all about giving everything at the start. It’s about noise, about splashes, and collisions and guts. It’s about mayhem and torture. Expend all of your effort in the first thirty seconds, and then simply try to survive for the next sixteen minutes or so.

That sounds simple enough, but it doesn’t make sense. Let’s imagine that you’re going to run a marathon. Will you run the first 100 m as fast as you can, hoping to nose in front and then hang on all the rest of the way ? Of course you won’t do that. But in the Boat Race that’s just how it is, and everyone knows it.

On the Tideway, it’s all about earning a lead. The teams are each assigned to one side of the river, with the course designed to balance out the distance for each. But if one crew manages to advance to a length ahead, they can take the shortest line from then on, condemning the hapless trailing eight to follow in the rough water that those huge oar puddles create.

Once fallen behind, it’s rare for a crew to come back and win. In recent years, it’s happened just twice, because of devastating equipment failure (when Oxford lost) or pure and resounding brilliance (when Oxford won). But perhaps my view isn’t always reliable, since I might have a favourite team, too.

This year, the race was a cracker. The weather was superb: a warm afternoon, with blue skies and calm waters. Not a ripple to scare the light blue cox (Cambridge sank in 1978), or even a huge barge nearby for them unluckily to steer into in broad daylight (they sank in 1984 as well, just before the start).

Yes, in 2007 it really was a tightly-fought contest, all the way down the course, and the standard of racing was extraordinary. Not because Cambridge were good, you understand, but because Oxford did fantastically well in finishing a hugely heroic second despite some undeserved setbacks.

We’ve suspected some bias here already, yet no one I’ve threatened so far has failed to agree that the 2007 race was all about the moral victory. And perhaps we really should close further discussion now, at least for another year.

So back to 1981. That’s where we started. At the end of a beautiful summer afternoon on the river. The same river, actually, as the one last Saturday, but 50 miles further upstream. The stream is narrower there, and the humble Thames has somehow transmogrified itself into the mythically-named Isis.

The races here are different. There is simply no room in Oxford regattas (or in Cambridge, for that matter) for the crews to race each other side-by-side all along a 2,000 m course. So what do they do ?

That’s easy – they all line up one behind the other, and they chase each other hell for leather instead. And if one boat succeeds in catching another, then those two swap places in the line next day, and over four days a crew can rise up or fall through the divisions accordingly. 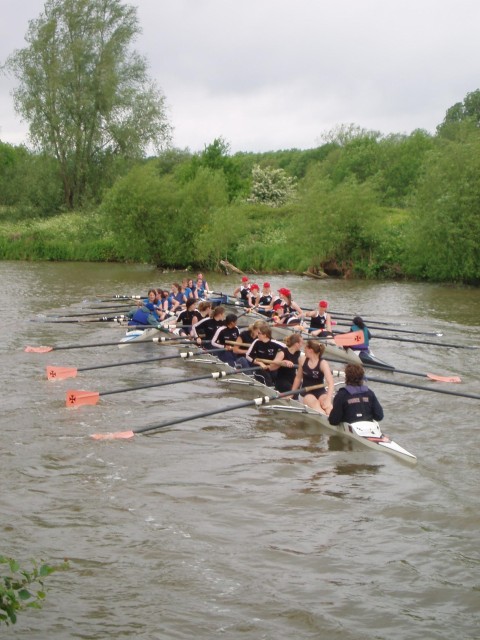 It sounds straightforward, but factor in the bends in the river, a hoarsefield of shouting, and several pursuits all concluding together – and the result is pure chaos.

That year I had no right to be there. I was simply spending a summer filling in for an absent bow man in the College 2nd VIII. It was a pretty good crew, with one very weak link. Me.

And in all of my sporting experiences since, however excited or apprehensive I’ve been, I’ve never felt more fear than I did in that boat. Sitting atop calm water for five minutes of tense silence, waiting for the stomach-wrenching roar of the start cannon going off deafeningly beside me.

Pulling at my hardest for two minutes to reach a breathlessly fast sprint and a long painful stride, and then desperately fighting off a fast-chasing crew, being propelled at the sharp end right into the melée of four metre blades, or hanging on grimly beyond survival and reason for a kilometre of pain.

That pain of exertion hurt every time, but it was the anticipation of pain which hurt so much more. That dull prelude of fear aching my bones all through the night and leaping next day like a wriggling squirrel into my throat on the line.

I did my best that year, even if it wasn’t quite enough. I lived that excitement, through five hard races. But in the end, I failed under pressure – I came apart – and perhaps that always was bound to happen.

Yet hard as it was, I learned from that experience, something which I had certainly known if never acknowledged before. And that wisdom learned so acutely has remained true ever since.

Because now I know, that in any kind of competition, or whenever we set out to extend our own limits, that sport really is all about fear.

We might be running further, or faster, or ski-ing a trickier piste on an icier morning. Or a run of good holes might see our golf shots drift from fairway towards lake, and from victory to defeat. But in every case it’s that sweet exhilaration which we’ll all strive to reach – that place which tests us, just a little.

So when we arrive there and dig deep … exactly how do we return ? And here’s what I know now – that we always emerge differently from how we began. We may be stronger. We may be weaker. But we are never precisely the same.

Perhaps none of us can easily admit to the nerves, the tension, or the fear which goes with our sports. But I know that we all feel them, and I know that with time we do become stronger people, through looking them right in the eye.

So that, my young friends, is what sport is all about. It might be a tale of the riverbank, but it’s one that has always been true. Since 1829, at least.

Sport is about fear, and the result doesn’t matter – because it’s the heightened experience of living which counts.

(Now all rules have addenda, and I’ve just two tiny details to add: that dark blue is the colour, and that the older of those two universities will always be best.)

This entry was posted in 2007, heroes, history, life and times, London, racing, rowing. Bookmark the permalink.