He’d been walking thoughtfully behind, but now his playing partners parted deferentially as he joined them. A brief flash of a film-star smile, a swish of a copper bracelet, and the ball soared into a blue Alpine sky. The finest player of a generation turned modestly to this lone spectator, nodding acknowledgement of the necessarily thin applause as another drive split the fairway.

The 16th hole in the last round, watching the defending champion come down the stretch at the Swiss Open and European Masters. And even though the double US Masters and triple British Open winner was only one stroke off the lead, and a smallish crowd was waiting in the single grandstand around the final green, with three holes left it still seemed there were only a handful of us actually out there on the course.

The European Tour has changed since then. By the time Luke Donald celebrated his Ryder Cup place with a victory in the same tournament at Crans-sur-Sierre in 2004, the crowds were massive. Just one event was responsible for raising the profile of the sport across the continent, and that was the Ryder Cup. And the one man who made it happen undoubtedly was that same Severiano Ballesteros. 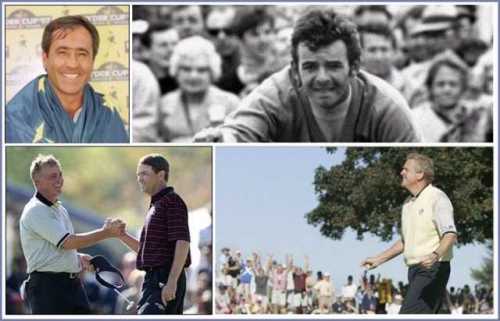 But it wasn’t really just one man. The change had begun long before, remarkably on the same day when I first came across the sport. While Seve’s golfing career had started so famously hitting stones on the beach at Pedreña in Northern Spain, the more unlikely birthplace for my own life in golf was an East London council house one Saturday afternoon in the autumn of 1967. My Dad was out with my Grandad watching West Ham (predictably enough, I see that they lost 1-2 at home to Wolves) and I was in my grandmother’s living room in Barking, when they interrupted the football results to show a young Tony Jacklin making the world’s first ever televised hole-in-one on the 16th hole at Sandwich.

Jacklin’s European PGA Championship that day was followed by a British Open win two years later, and a marvellously dominating US Open victory the following summer. In many ways, that time marked the first turn of a very low ebb tide. But despite a historic halved match at Birkdale in 1969, GB and Ireland rarely threatened the US dominance of the sport in general, and of the Ryder Cup in particular.

Nevertheless, progress was being made, all through the years whilst I was becoming familiar with the game. Soon after Jacklin’s win at Hazeltine, we moved to the Midlands where late summer evenings were perfect for 9 holes of crazy golf after school in Warwick. It was a return visit to London which saw my first attempt at a larger scale version of the game, on the municipal pitch-and-putt in Upminster, and by the time I attended my first tournaments in 1973, watching the same Tony Jacklin hit a 245 yard 3-wood to 3 feet on the 72nd hole to win the Dunlop Masters, I had graduated to the full course in Stratford-upon-Avon. I didn’t know it then, but the first captain of my new golf club at its present site was a certain Mr Samuel Ryder himself.

I’d stayed up late that year to see Peter Oosterhuis nearly win the US Masters at Augusta, but we’d have to wait a while longer to find another major winner in Europe. By 1979, when Ballesteros at last won the British Open at Lytham, it was a European team which faced the Americans in the Ryder Cup. But, even then, it was four more years before we thought we might eventually win it.

Fast forward to another late afternoon, 16 years after Jacklin’s historic seven-iron, and I was a university golfer playing the famous links at Sandwich myself. If one thing is certain, then it’s that one down, playing the eighteenth in the final foursomes is not a good place to be. And if I felt like castigating my partner for putting me into the knee-high thick rough, forty yards right of the green, with a deep pit of a bunker in front and precious little green beyond, I could hardly complain, having dumped him into the water at the Suez Canal just four holes before.

There were just a hundred or so people standing around the green that day, but my knees were knocking as I played that delicate pitch. They were knocking, too, when my partner bravely holed the four-footer that followed, as somehow we scraped a half point. It certainly wasn’t the Ryder Cup, but it gave me my first real feeling of what it might be like, to play competitive team golf under pressure. And whilst my student education had seemed up until then to be mostly in golf, with geology as something of a subsidiary subject, I did eventually turn that around, and today I’m relieved to make my living through a rather different kind of hole in the ground.

The 1983 European team fared much better than my own Oxford team that year, and almost won in Florida. Jack Nicklaus memorably kissed the divot made by Lanny Wadkins’ wedge shot that saved the day for the Americans. But the tide was unstoppable by now, and appropriately it was captain Tony Jacklin who lifted the Ryder Cup at the Belfry in 1985. The team now included three major winners in Ballesteros, Lyle and Langer, whilst Faldo and Woosnam were soon destined to join them in the golfing elite. That long-desired win in the US finally followed in 1987, with a tied return match in 1989. The contests have been closely fought ever since.

And it is, now, a thoroughly European team. Spaniards Olazábal, Piñero, Garrido, Cañizares, Jiménez and Garcia have played just as well as their mentor Seve, whilst the Swedes Johansson, Haegmann and Parnevik have also made their mark on the event, helping to bring out the best of the British players. It seems, too, that every European victory has owed something to those Irish eyes asmiling, whether at Christy O’Connor’s famous two-iron across the water at The Belfry, Rafferty’s resilience in a host of critical singles matches, some celebrated match-winning putts by Eamonn Darcy, Philip Walton and Paul McGinley, or another cheeky grin from Padraig Harrington.

The Americans, too, have played their full part with guts and guile over the years. The atmosphere had been tense at Kiawah Island in 1991, when Langer’s final putt lipped out a Ryder Cup, but it was only at Brookline, in 1999, that sportsmanship was briefly forgotten amongst the excitement of a pending victory. It is good to see that now as just a temporary aberration, at last put harmlessly to rest by the exemplary sportsmanship shown yesterday by the players and crowds in Detroit.

America truly is a great country, its golfers as proud, as talented and as dominant in the world today as their nation has ever been. There has been a lot written about the American superstars and the difficulty of getting galácticos to play as a team. But you only had to look in Phil Mickelson’s and Tiger Woods’ eyes last night to see that defeat this time hurt just as much as earlier losses had hurt their European opposition before. The greatest players in the game will surely come back to fight another day.

But maybe, just maybe, this simple golf match can bring some elements of hope to our visions of the future. The concept of a united Europe, able to hold its head high in the world, knowing that unity with diversity can bring harmony and strength. An American realisation that might alone is no longer enough, if not thoughtfully enough applied. An acknowledgement that there are other worlds out there, other qualities and other values. A wider, inclusive perspective, bringing benefits not just to the golf course. Now that really is something to think about, when next I’m out running.

This entry was posted in 2004, divided by an ocean, golf, heroes, life and times. Bookmark the permalink.