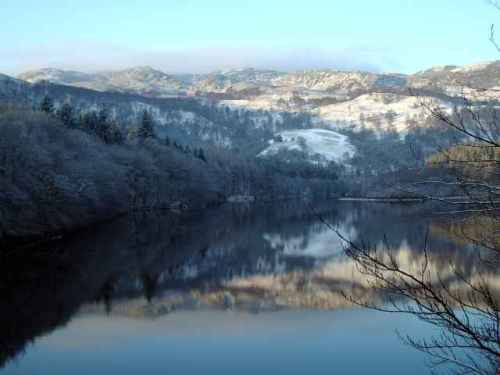 It wasn’t all of Chrissie Hynde’s two thousand miles, not quite, but it felt like a very long way as I drove back from Pitlochry last week.

That familiar sense of anticipation and dread on setting off. The usual dodgy stuff thrown into the middle (for the obligatory bad runs in February, just substitute an hour of stationary evening traffic near Manchester). A growing sense of achievement and tiredness as the miles fall behind you. Desperate exhaustion as the end approaches, before a chaotically emotional 26 mile race (all the way along the M25). Then, finally, the relief and delight of bringing it all home. And if there wasn’t a medal waiting for me at the finish in Guildford, maybe those feelings of elation were almost as real.

Uncomfortable and tiring as it was, that drive gave much more perspective to my Christmas in Scotland. I flew to Aberdeen only yesterday, a trip of just about the same length, but it really didn’t feel like it, through an hour and a quarter in the air. Because just like with running, sometimes it’s the covering of distance and the experience of views on the way that give true value and meaning to a journey.

A Perthshire Christmas we shared this year, and wonderful it was, too. A huge family gathering in a big old house, with roaring log fires every night. All those lashings of food and gallons of drink made exercise seem even more important – and just before the weather changed, we did manage to fit in a round at Pitlochry golf course. Temporary greens, temporary tees, and teeing up on the fairway – not the sort of game you might really choose. But it made little difference to the experience – sunshine, blue skies, pine trees, rolling hills, snow on Ben Vrackie in the distance, and wonderful scenic glacial topography to chase a white ball over. It wasn’t quite Gleneagles, but it was charming and enjoyable all the same. As was the perishingly frozen game of tennis we enjoyed on Christmas Day itself.

The frosty and snowy Highland days to follow were clear and crisp, but sadly unsuitable for playing either game again. Just as well to have running in my bag then, to provide the perfect reason to get outside and look around. A random kind of exploration it may have been, but there was no other way I would have discovered the views of Loch Faskally, the vistas of lonely mountains to the north, and the wonders of the fish ladder, built to offer a by-pass to Pitlochry’s hydroelectic dam for home-bound Scottish salmon.

My own long hill homeward, up through the town, presented challenges at the end of a five mile run on Christmas Eve (fortunately solved by the necessity to stop and buy some last-minute presents on the High Street). But it was an essential workout, since no buses were running to our base in the village of Moulins, and an uphill slog was compulsory one way or another – running or walking. I managed both approaches during the course of several runs. Only once did I really have to resort to crawling over that final stretch, but on that coldest of all our mornings by then I’d already stopped my Garmin with 12.3 snowy miles on the clock. Undoubtedly one of the slowest distance runs I’ve ever completed in training, but at least the soft snow on the hilly road to Logierait could pretend to excuse the truth of all that Christmas pudding.

We made a couple of excursions beyond the valley, too. To Perth on Boxing Day to see a St Johnstone home game (a deftly executed 1-1 ‘victory’ against Ross County, fittingly earned following a catastrophic early defensive error of hilarious and classically inept West Ham proportions). That was fine entertainment and a rewarding cross-cultural experience, too.

And then we travelled to St Andrews. I’d visited for a conference, long ago, but it was two sporting ambitions in the Kingdom of Fife which begged my fulfilment now. I have to report that my fifty yard sprint along the West Sands on a late December afternoon was nowhere near as lyrical as the sunlit opening scene from ‘Chariots of Fire’, but you can rest assured that the efforts put into choreographing the action and finessing the camera work for my own running screenplay were every bit as Olympian.

Later on, as the evening fell, and after we’d fitted in the castle and the cathedral, there was that final and most important duty I wanted to achieve. A stroll at dusk with William and Emily, past Old Tom Morris’ house to the 18th of St Andrews’ Old Course. A wander across the roadway of Granny Clark’s Wynd and a chance to emulate and experience the famous second shot to the final hole. The light was fading, and I must admit that our golf balls, and clubs, were purely imaginary. But as I coached my youngsters on the correct stroke selection across the Valley of Sin to the most famous green in golf, the sense of sharing history and honouring glory was every bit as powerful as I had hoped it would be. There could just be no better place to teach children about the wonders of this game.

Five hundred and eleven miles each way to Scotland, then. I make almost the same trip, there and back in a day, just about every month. It’s a very long way, almost too far to travel, over land. It’s so much easier to fly. But in order to experience a journey, and a distance, and really to benefit from it most, I think you do need to see it. You have to live it, too.

My 2005 reel of memories and photos is finally closed. And there’s a marvellous Highland Christmas stored deep inside, just whenever I want to look.

This entry was posted in 2006, music, Scotland, winter. Bookmark the permalink.