This poster called as I walked from the station, reminding me that it’s time to wrap up my series on Kenya.

My visit last summer left me with a whole lot to say about the country, about Africa, and our attitudes to the continent and her people. I sat down to write, and the project found life of its own. Today I’ll outline some highlights, final thoughts and reflections.

This journey opens where it ends, on The road to Mombasa. When we look at Africa from within our daily lives, we see it always from a safe distance, on television or in the newspapers. That remoteness prevents understanding. From the comfort of our own familiar existence, we simply can’t comprehend the reality of the different world which exists there.

That’s why, right from the start, I want to take you there, into the heart of an African night. I want to place you deep within the dark continent, as the day is slowly dawning.

From here, we can focus not on the remoteness of Africa, but rather on the sensation of looking back at our own lives in Europe and America from another viewpoint entirely.

Travel offers us the unique facility of reversal through the mirror, as we reflect on lives lived another way.

Can you imagine yourself as a Kenyan woman walking down the broken tarmac of the East African coastal Highway at 4 am, in the rain, with a bright yellow water carrier balanced on your head? Can you see yourself, and your own work, through the hollowed eyes of the emaciated man wearing a muslim headdress, earning a slim living carrying tourist bags through the airport?

In The dusk behind the beach, I greet you in the safe enclaves of little America and little Europe, in that thin beachside strip of land cooled by the ocean breeze, and I run with you to find Africa beyond. Four hundred metres is all that it takes to enter the equatorial girdle of this continent, stretching deep and green and humid for four thousand kilometres.

It’s a mix of cultures here, both imported and indigenous. The crippled beggar in the Arsenal shirt rubbing shoulders with the burkha-wearing women and young couple in student shorts and tee-shirts. ‘Jambo sana’ (Hello, very much) call the shopkeepers as I pass, their friendly smiles welcoming the stranger. Further along the road, I pass houses – mud hovels – and shops – pathetic tin shacks.

Let’s consider the reality of living in a country with no infrastructure, no services, and not enough food either. Women fetching the water for their families before the pitch black of bedtime. Children going to bed on the earthen floor with no mattress or mosquito net and not enough to eat. How can we ever complain about our lives back home, as we routinely eat ourselves to death?

Can these half-starving millions forgive us? Do they? Should they? The dusk falls as I return to the hotel, the night air thick with the smell of woodsmoke, of insufficient food cooking on an open fire. 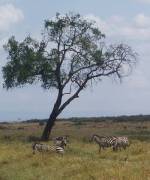 And increasingly, as the morning wears on, I ponder that the whole tableau is witnessed by a curious cavalcade of Land Rovers and minibuses, each bearing half a dozen long Canon lenses, poised for the shoot. It’s no desolate endless plain here, but a managed tourist bonanza extending across just a tiny fraction of the continent.

We visit a Masai village, to witness the warm welcome of these people, and their hard business sense. Kicked off their land to accommodate mere elephants, this elegant race now depends on tourism to survive – both exploiting and exploited within the final zoo on Earth.

Back on the coast, I ponder on an orphanage and the disaster of African AIDS. We set up a visit to deliver some old clothes, shoes and toys. By chance, a new orphanage has just opened, run by a British woman who has sold up her house near the town where we live. She’s given her life to the welfare of the children of Kenya, and has braved bureaucracy and intimidation (even deportation) to accomplish her dream.

The children in the orphanage are in many respects the lucky ones, sharing shelter and proper food, sleeping beneath mosquito nets and in safety.

But their happy smiles hide the hardships and family tragedies which have brought them here, and the wider disaster of AIDS which reaches into the lives of every community in Africa.

With no money for the purchase of paracetamol, let alone expensive retroviral drugs, one third of Kenya’s 34 million population will be dead inside a decade.

The situation in Kenya grew dramatically worse in late December 2007 with the outbreak of violence across much of the country following a struggle for the Presidency. In On corruption and a crooked election I describe some basic economic realities of corruption, and how it evolves through the Darwinian struggle to survive.

In 2006, Kenya was the 155th country in the United Nations table of economic prosperity, and that was before its economy was devastated by the outbreak of near civil war and the overnight collapse of international tourism.

The country had previously been targeted in 2003 Al-Qaida attacks near Mombasa, and the tourist trade had only recently recovered when violence broke out.

The eradication of corruption? That will depend on the establishment of a stable government and a dramatic improvement in the economic scene across the country. This will be hard to achieve without sustained foreign support. The country has no real funds of its own – and amongst the many western companies presently doing business in Kenya, the majority pay no tax in the country at all.

That observation leads to a far bigger question: Africa – how can we help? The fact is that the scale of the problems is massive, but every bit helps.

Tourists visiting the country can do much to assist on a small scale, by engaging the services of local tour companies rather than lining the pockets of western hotel owners.

They can inject cash directly by tipping thoughtfully where appropriate, and by donating both to institutions and to people in need.

The shocking truth is that although this part of Africa lies in neither a famine nor a war zone, almost everyone here has real need of charity. Those in employment suffer low and unreliable wages. Those in jobs have to support the many who aren’t, and the majority of the people are, if not starving, then painfully thin.

A vivid debate broke out in the comments here. The point was made that individual tourists had no power to bring change, and that the most constructive action for Africa would be to donate your entire holiday fund to Oxfam.

Criticism also centred on the ecological cost of our visit, in terms of the carbon budget to travel there. And did writing about Africa from a tourist’s perspective run the risk of insulting the country and my readers by imparting an incomplete view?

These criticisms are well taken. Oxfam is the worthiest of causes, and Africa certainly one of the most deserving of her targets.

It’s true that my view of Kenya, and of this continent, only scratches the surface. But I’ve travelled to Africa throughout my professional career, and my work has afforded me the (not always comfortable) opportunity to witness more of Africa than many people can.

Kenya is a large and diverse country, with many more natural wonders and hardships to see. I read about the wild lakeshores, the bandits and flamingoes of the northwest of the country. The wonders of the Rift Valley, and the serenity of the Tsavo East National Park.

Even before our visit, I knew something of the desperate conditions in Kibera – the slums of Nairobi, and last winter’s violence has shown us much more of the conditions there on the television news.

But we’re back to that problem of remoteness again. In this series, I wanted to describe something of what I saw, on the ground, and to share my experiences in visiting just a small fraction of Kenya.

To provide a full account of the whole of a country would require much more time, yet my intention here was never completeness. You can check Wikipedia for that.

If this series has made us think, just a little, then it’s been well worth the effort. In the nine months since I returned, 5,000 people have read these articles, and I hope many more will continue to do so in the future.

Travel offers a different perspective. Reversing through the mirror, and looking at lives lived another way.

Africa has so much to teach us, and she deserves so much more of our support.

This entry was posted in 2008, Africa, environment, Kenya, summer, travel. Bookmark the permalink.