I’ve run along the Wey towpath a thousand times. The river passes through Guildford not far below my house, and close to where I used to work.

From Guildford, I can head north or south to link with other paths and tracks on routes from 3 miles to 22. Some of my earliest, shortest and most faltering runs played out along the river bank, and some of my longest and hardest pre-marathon tests as well. 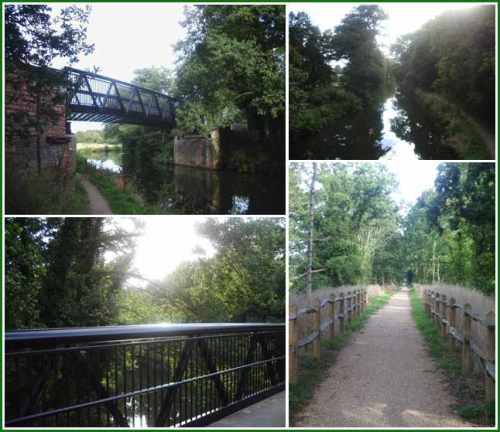 I’ve run there in lunchtimes, mornings and evenings, from the office and at weekends, in spring, summer and autumn, and in dry winters, too.

And although the riverbank lies almost on my doorstep, it’s still one of the most beautiful places I know to run, just about anywhere.

The changing light and seasons are played out across the water in a quiet, restful way, and there’s always something new to see.

Whether it’s the calm and tranquility of the floodplains towards Godalming, or the historic trading stretch leading to London and the Thames, the river has delighted me around every single loop.

I ran along the River Wey again last weekend – nine miles on a pleasant early autumn morning. It was thoughtful time, really, more than training, but it’s fitness of a kind, and distance in the bank before my next race, whenever that happens to be.

But this run was different from any I’ve done before, since I crossed the river in a different place. The railway bridge on the Guildford to Horsham line was demolished when the branch was closed down by Beeching in 1965. Its old trackbed was reinstated as the Downs Link path stretching to Cranleigh and then to Shoreham, far beyond, but that trail never quite linked with the Wey. Because whilst the old bridge ramparts were still standing, the empty span left nothing more than a frustrating air gap across the river.

A year or two ago, the paths leading to the absent bridge were refurbished. Soon after, a pair of metal fences sprang up at the bridge foot, and eventually some white planning signs, too. But they stood there so long that I doubted anything more would happen.

Then this summer, for a month or two I ran elsewhere – on business, and on holiday. One thundery evening in early August, I took a train to Woking, and ran 16 miles through floods and puddles out along the Basingstoke Canal and back along the Wey to Guildford. But I didn’t run that southern reach. Not for a while.

And so when I reached The Parrot Inn and headed south from Broadford Bridge towards Unstead Lock last Saturday, there stood my great surprise. Inside two short months, the new bridge had arrived at last, and settled into place.

A simple design of black metal bars and struts – it’s just a bridge, and nothing more or less – but I like it very much. A sleek and understated form that looks clean and fresh, whilst hinting faintly at its railway origins. And despite its modern incarnation, this bridge looks and feels like it might have stood for ever – as indeed it really should have done.

It’s all too easy to report bad news. To complain about our modern life, our lack of consideration for the planet. Our mindless planners, putting the car and business before the environment we share all around us.

But this time, I know they’ve got it right.

When I found the bridge, last weekend, I deviated from my usual route. I ran across it, and then I looped a joyful route around the floodplain, to cross back and forth a few times more.

And this weekend, I cycled down to the new bridge once again. Admired it, looked across it, and sized up its reflections in that late summer sunshine which is so special to September. Gazed down on the river, from a different place, and smiled at the other happy walkers and cyclists, just like me.

Because we may have waited a long time for this bridge. But how much we’re all going to enjoy it now.

Related articles:
83. Seven Bridges Road – the Wey floodplain
109. Happiness, more or less
58. Running in the North Downs
134. Before the mast: Pewley Down, Guildford
76. A year of running, rainily
138. A winter Sunday on the North Downs

This entry was posted in 2006, Guildford, history, summer, Surrey and Sussex. Bookmark the permalink.