57. Blackpool Marathon: Welcome to the Pleasuredome

It’s a cold and blustery June evening, beside a deserted beach somewhere in Northern England. Far out to the west, the sun is setting beyond the receding tides, as the Irish Sea is whipping itself up into a swift herd of white horses. The weather doesn’t look that good for tomorrow, but it’ll be far too late to worry then. For when I see this spot again in the morning, it’ll be at the 23 mile mark of the Blackpool Marathon.

Like many a mad notion, it had seemed a good idea at the time. To take all that training from London, and put it to good use. To rest a while, and then pick it up again in full flow. To run a race with minimal preparation, but to maximum effect.

That was the idea then, although it wasn’t until a few days ago that I really believed I’d make tomorrow’s start line. Just two months of time, and four long runs were needed, but it was always going to be a fine line to tread. Between keeping my fitness, and pushing too far, too fast.

And so it’s a sporadic, and increasingly defensive training programme that lies behind me this time. A few lunchtime runs, ditched by expediency. A few little niggles, that threatened to become more. Somewhere mixed in, a fast race in Manchester, so good for my soul, yet exhausting of energy. A couple of long runs, completed much slower than plan, and a few shorter ones which simply proved shockers. A sore last five days, with no running at all. But I’m here.

It’s truly a fine stretch of coast. Miles of open beach, facing wide onto dune fields, peaceful tidal marsh, and a foreshore stretching far into the distance on a falling tide. There’s just one big blot on the landscape, and that’s Blackpool itself. The biggest and brashest of all our summer resorts, its long strip is all but a parody of the British holiday experience. Lost somewhere between Lancashire and Las Vegas, its elegant winter gardens, dramatic Victorian tower, and friendly faded trams and piers, are all set alongside soaring rollercoasters and tawdry amusement arcades. And with its mile upon mile of tacky diners, seedy hotels and earnestly cheap bed-and-breakfasts, Blackpool invites family fun like of yore, whilst unfaithfully hosting the stag night, the hen party and the dirty weekend.

This long coast of contrasts boasts a proud running tradition, and two thousand runners line up for a start by Ron Hill, a Lancashire legend and 1970 Boston champion. On this grey and cool morning, overlooking a gunmetal sea, Blackpool might be living up to its name, but there’s a warm atmosphere on the road. The first few miles pass almost too smoothly, with just a weary wake-up call from my left ankle. Registering its right of reply, it sportingly settles for relaxed resignation without more ado. Then a timely shower distracts me from all reasonable doubt, and I dart left at the split point, into the scary oblivion of a sparse marathon field.

I’m conscious of feeling fresh and fleet of foot, as we tick off the miles out of town. Six effortless miles, through a long and wild dune field encroaching the road, into genteel Lytham St Annes. This is a different kind of resort, one of flowery wallpaper and afternoon tea, its famous and ancient golf links a regular host to the British Open, but it’s swift feet, not Severiano, that I’m chasing today.

Lytham’s fine white windmill looks tiltworthy at 10, as we start to head back into freshly blue skies and a stiff northerly breeze. At Fairhaven we pass 14 miles, and my credit account, so easily opened, has become a due debt to repay. The splits rise too swiftly. Just thirty seconds a mile, it seems almost manageable at first, so it’s hard to say exactly where the dream fades away. But that dune field has doubled its length during an hour’s run traversed, and by the outskirts of Blackpool there’s a long summer day’s shadow looming straight up ahead.

The marathon’s darkest chasm stands right before me, eight yawning miles wide, a stony steep rockface the only route left to the light. Over a cornice of pain, or a glacier of fear ? Yet it’s an invisible icefield to the hungover clubgoers, now surfacing at noon to gaze on our Promenade plight. We exchange puzzled glances, as mutual amazement runs right through this pleasuredome parade of a marathon course.

Meanwhile, a tortoise-and-hare game is unfolding out here in the pack. Seven upwind miles’ toll has been paid, and not only by me. A flag-waving family inspire a flagging mother alongside, as she surges ahead briefly, before falling back through the breeze. My next mineral water shower sees her burn by again, and we play long restless leapfrog until rejoining the seafront at a fast-tiring mile 20.

Three more endless miles are lived out, in search of a turning point that refuses to come. It’s a seaside stretch of hard bargains – half a mile earns a biscuit, each whole one, two wine gums. Repeat and repeat. Repeat again until my pockets are empty. A parallel reality runs on dimly as background, screening a high tide to send sparse crashes of foam now splashing the path. Another Pennine Spring dousing at 23, and we turn back for the longest lope home.

At last on the clifftop, the wind’s behind us again, but these are hard miles now. That sunset last night cast a long rollercoaster of shadows before a descending last mile – a torrid topography for tired, tortured legs. We leapfrogs limp on, up sandhill and down dune. I inch slowly forwards, onto the heels of five fatally slowed runners, one old, two young and two more now prematurely aged.

It’s time to end it all now, with a mind fully blanked, and legs hurled downslope. A final flat quarter reveals a road surface of red, bucking under my feet. A last runner ahead – but is there a chance ? Competitive – me ? More grist to my mill, and with ten paces left, my leaden legs force past to welcome the line – 4:10:58.

As I step past the line, a grin wide on my face, my double-fist salute is a new one for today. Exuberance is due, for however you get there, it’s one hell of a trek. This medal is just beautiful, but they all are to me. There’s no prize in life for not trying, yet so much pride in the fight. 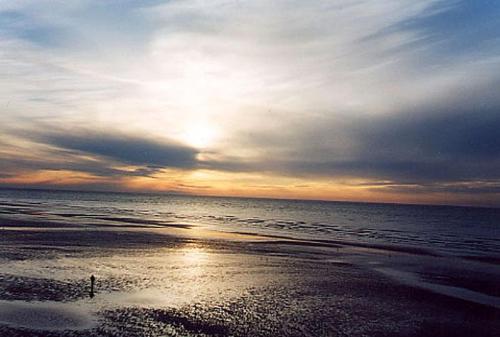 This entry was posted in 2004, music, racing, the marathon journey. Bookmark the permalink.